I volunteer at my daughter's elementary school by joining the school's Foundation. I served as president of the Foundation for the past three years. Last year, we held our first annual Pumpkin Patch at the school. We sold 200 pumpkins. We also had a Bubble-Fogger machine which was a big hit. The Kindergarten kids were chanting from behind the chain link fence as we were setting up, 'HALLOWEEN! HALLOWEEN! HALLOWEEN!!!"

This year, we're doing it again!

You're welcome to come on by and support R.D. White Elementary school at 744 E. Doran Street in Glendale.

Here are the flyers that I made for the event(s): 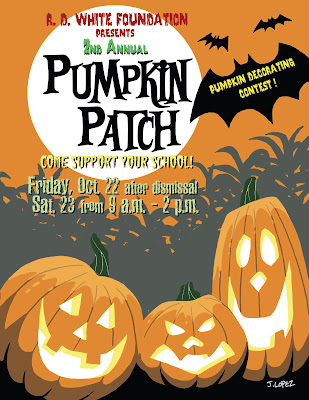 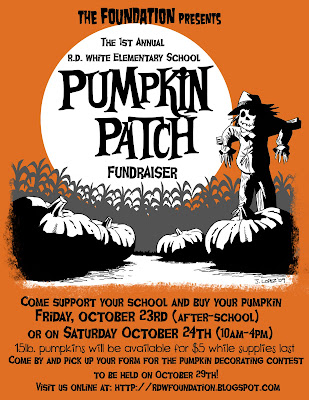 Here's last year's sign that I painted (the kids helped, too): 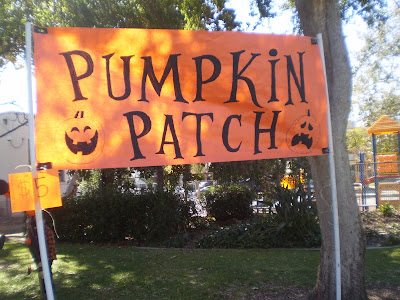 After the event, I kept it outside in my backyard and it rained. I didn't want to go through the trouble this year to make a new one so I decided to have a 3' x 8' banner made that'll look something like this:

The Ark of the Covenant - Cherubim

So I'm working on this haunted house walk-through attraction with some friends called 'Nightmare at the Museum' in which the exhibits come to life. In one of the rooms, is the storage room in which a crate has fallen and broken open to reveal that it encased the Ark of the Covenant (from 'Raiders of the Lost Ark'). My friends wanted to build one but needed someone to make the cherubim on top. I remember those cherubs from the movie and the design facinated me. I always thought it would be fun to have a set of those to put up on my desk so I volunteered to do it.

We did some online research. There are many depictions of the cherubs as you can see here: 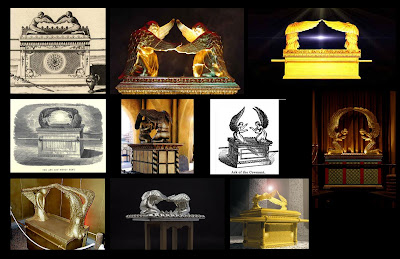 I noticed that they all are pretty similar in concept. That's because in the Bible it actually describes how the Ark was to be constructed (even to the exact measurements!). It was to be a box made of wood and plated in gold. On top of the box was the cover or "Mercy Seat". Two cherubs made of gold were to be on either end facing each other with their wings outstretched and touching. You can read all about it here.

The most popular version is the one from 'Raiders of the Lost Ark' so that's what we decided to make.

We found a few sites that had detailed pictures and schematics on how to build your own Ark of the Covenant replicated prop from the movie. Here's is some of that reference material: 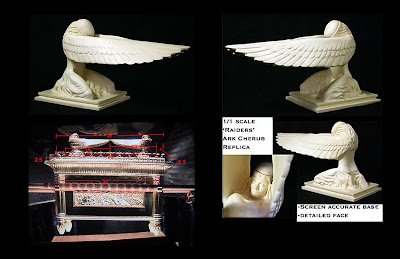 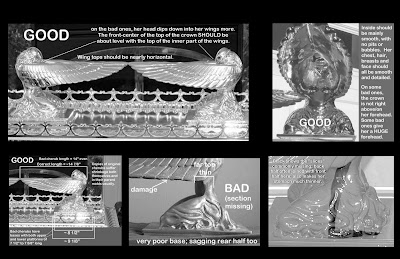 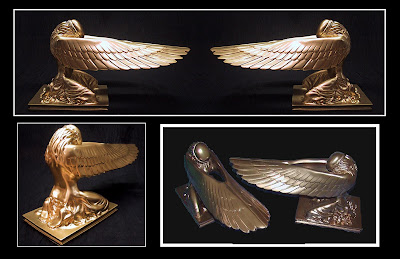 so here's mine....(granted, I know it not EXACT. Even with all the reference, it was still hard to see the full detail so I had to take a few liberties and while I was at it, I might as well do it to how I wanted to see it. Its been awhile since I sculpted - maybe even YEARS! When I added up the time spent to make this, it took me about 3 - 4 eight-hour days.)

I set up in the dining room which made my wife a little concerned. (she does that groan that Marge Simpson makes about Homer.) This way, I can be near the kids and feel like part of the family. The kids took over a box of clay and had fun using the pasta maker (which I use to help knead and soften the clay to make it workable).

First, I blew up an image of the cherub to size. Then made a wire armature to match. Then I slapped some clay on, roughing out the forms. This process took about 8 hours.

(if you look closely, you can see a toy box that looks like the Ark. My kids asked, "Can we put candy in there?") 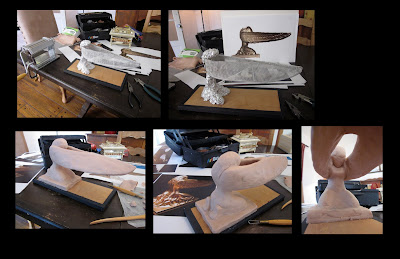 Then I started refining the shapes and adding detail: 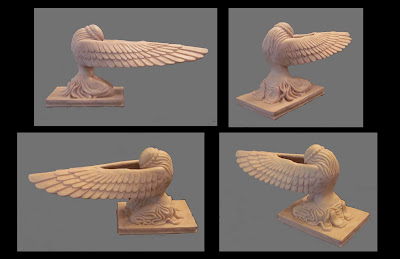 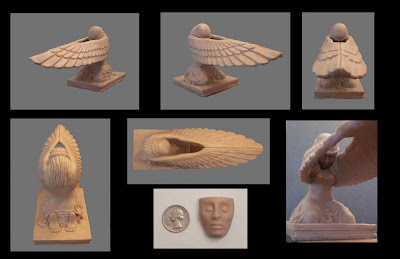 The hardest part was sculpting that tiny face. As you can see it was about the size of a quarter. Originally, I tried sculpting it by trying to work my fingers between the wood and wings--this proved to be a useless waste f time. Then, I got this idea to sculpt the face , bake it then squeeze it into the main sculpture. "BRILLIANT!" , I tell you.

As I was sculpting it, I was thinking, "Why am I spending so much time on something no one will see?" Then I thought 1) because I know people will want to look on the underside and expect to see something there and 2.) because I'll know! I'm creating art--I have to feel good about it.

I swear, I could have gone on forever finessing this piece, smoothening it out, taking out pocks and finger prints, etc. until finally I just had to call it "done". At times, it's fair enough to say, "This was my best effort and what I was able to do in the time given." 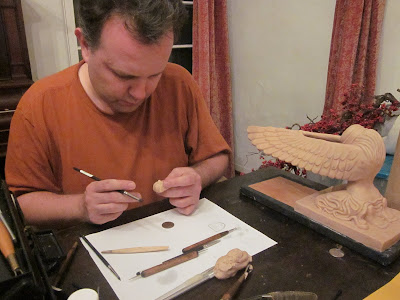 After seeing my friend Peter's Halloween concept, a friend of mine sent me a link to this which I thought you all would find interesting and fun!

This group of people in England made a Halloween attraction in their garage. IT"S GREAT!

(Note: If it doesn't fit, double click on the movie and it will take you to the video posted on YouTube.)

THEN, WATCH THIS (the engineers view):

(I like how when they go way into the future, the whole earth is covered in water due to the global warming/melting of the ice caps.)

I always used to call this genre "Jules Verne-style" but I guess the "official"/commonly used term fot it is "steampunk".

According to Wikipedia, the term "steampunk" was coined by a science fiction writer K.W. Jeter in an effort to find a general term for the works that were being written about in the mid 1980's/early 90's with regards to science fiction stories that took place during the Victorain-era (1837-1901).

The style would be derived from how people of that time would have envisioned such machines/devices. Most of these devices were operated via steam power (like a steam locomotive) because that would have been the greatest source of power available to them during that period with a brief introduction to electricity.

Examples of this can bee seen in 'The Wild Wild West' in both the film version (1999) and the television series that ran from 1965-69. 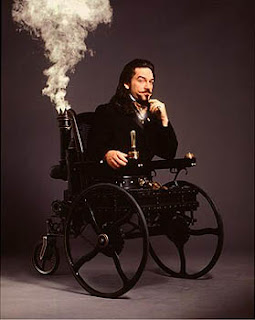 The machines and devices were built of riveted steel and brass but were fashioned with an elegant and ornate feel as opposed to the "grungy" post-modern industrial style depicted in such films as 'Blade Runner' (1982) and 'Alien' (1979).

One of the earliest depictions of Victorian-era science fiction would be the French film, 'A Trip to the Moon' (1902).

Since then, the more popular depictions of Victorian-era inspired time traveling/science fiction devices have been Harper Goff's design for the "Nautilus" from Disney's '20,000 leagues Under The Sea' (1954). 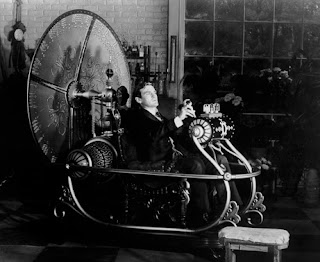 The inside of the Fangoria Machine and my friend's steampunk drill/Halloween project is reminiscent of the one in 'At The Earth's Core (1976) starring Peter Cushing (after watching it, its hard to believe that he was Grand Moff Tarkin!)

Then there's the time machine form the Nicholas Meyer's film, 'Time After Time' (1979). 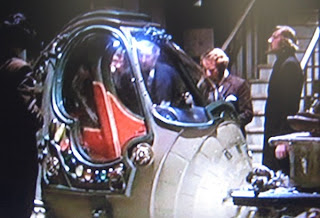 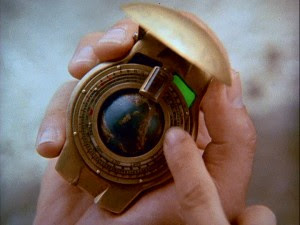 I have to admit, 'Voyagers!' was/is a guilty pleasure of mine. I remember in the episode "The Trial of Phineas Bogg", The time-traveling Voyager, Phineas Bogg is called back to home to stand trial for breaking the Voyager code and the villainous prosecutor, Drake had his own "pimped-out" Omni made of silver which was unique and untraceable. 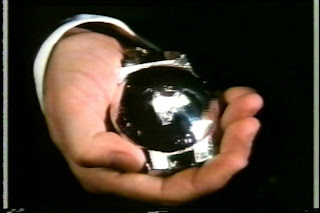 Drake was eventually discovered to be obstructing justice and fled only to go back in time and be hunted as being "Jack The Ripper" and... 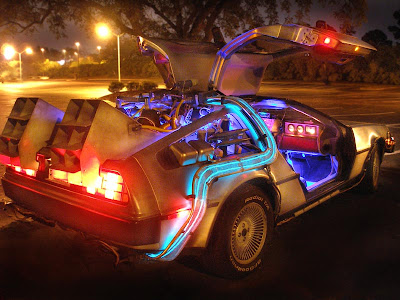 Here are some candelabras I made last year that were inspired by the stretching room gargoyles in the Haunted Mansion (look closely to see the detail): 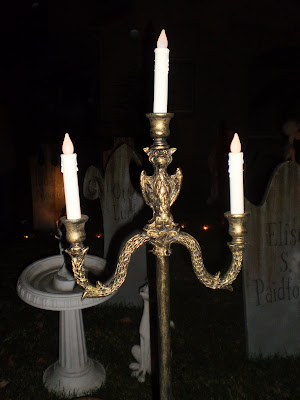 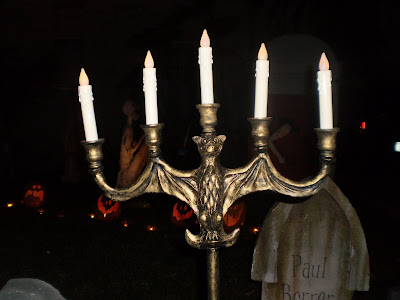