I got back pictures from Halloween, 2006. I took them with a film camera using a long exposure and slow shutter speed. 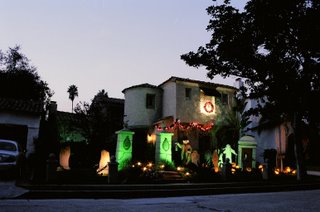 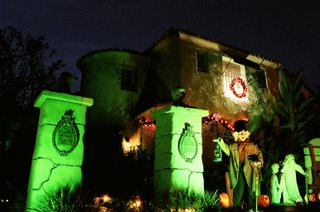 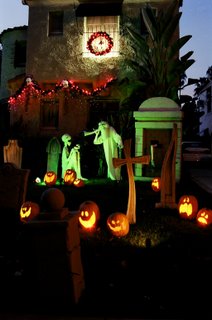 ...and here's to my inspiration, Blaine Gibson. 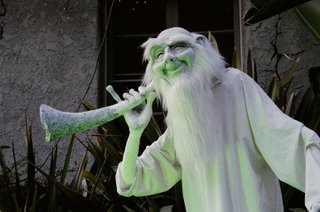 The old man's head I made from aluminum foil and Sculpey. Over time, he fell and cracked, etc. I had to do some last minute touch-up with plaster wrap/bandages and Das Pronto modeling clay. The hair was actually cut from a cat costume. 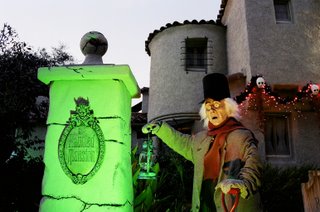 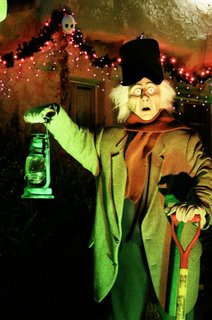 The gravedigger-same thing as the Old Man with the earphone (but I took better care of it-although the Sculpey is starting to crack.)

This is a mini-graveyard I put together on the patio near the front door. It needs work. One day, I have in mind to make an animated Halloween short film and project it on the wall of my neighbors house (above the fountain). We'll see. 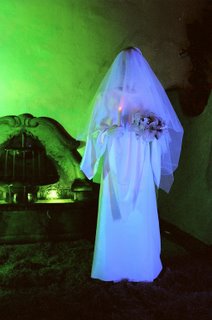 You know, I had this thing stored in my office closet just before putting it out for Halloween and I swear whenever I went to opened the closet door I would see this bride just standing there and it would creep me out, seriously! Go figure. After Halloween, I couldn't stand the thought of this thing still sitting there, so I removed the clothing and kept it in a box. Now it's not sacry anymore. When I was a kid, we would visit my aunt and uncle in El Paso and they had a suit of armor at the top of their stairs. I was so scared of it, I wouldn't go up there! I was always afraid that it would move like the one in the hallway of the Disneyland attraction where they would hire a cast member to dress up in the suit of armor and jump out at you during the ride. 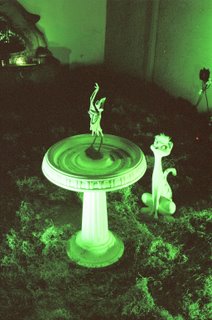 I used to have a jar labeled "Sulfuric Acid" sitting next to the cat-hinting that he replaced the water in the birdbath with the contents and the bird was in mid-shower pose before it discovered that it was too late! Usually I have an atomizer or dry ice in the birdbath to create a boiling/fog effect. But at the time I took this picture, I didn't have anything handy.
Posted by James Lopez at 12/18/2006 12 comments: