One of my favorite kinds of films are "caper" films. Caper films are films in which a character or an ensemble of characters has to steal something. A heist.

What I usually like about them is that, along with the person they are heisting from, they also "heist" the audience, too. Meaning, just when you think you've figured it out there plan, there's a twist that makes you feel as though you've been taken...but in a good way.

Anyways, I've been meaning to do an animated heist/caper film.

Recently, I've been catching up on the AMC series, 'Mad Men' which is set in the 60's. I thought, I really like that period in history with regards to style, fashion, architecture, cars, etc. So, I thought, why not do a caper film set in the 60's?! 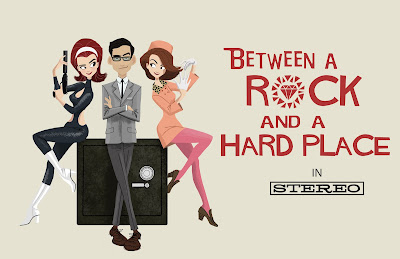 I came up with this idea of creating a "lobby card"/movie poster that would depict a confident man played between two mischievous women, like a shoulder angel/devil. Jackie-O vs. Emma Peel. I wanted something symbolic of theft and so what would be better than a safe? Then, I thought what would be a good title for this? I took a look at it and saw the differences between the two female characters, one "good" the other one a little "naughty" and thought its like being between a rock and a hard place. Then I thought, you know, "rock" is slang for a diamond...we'll make it a diamond heist!

I couldn't decide whether the man should be the curator of the diamond or the ring leader of the group.

So then I just started drawing/designing characters and then painted them.

This one a had a vision of Robert McGinnis' image for the Bond film 'Casino Royale'.

I wanted to do another pose. (This one I took from a sketch I did in a gesture drawing class.)

This one I referenced Jackie-O. 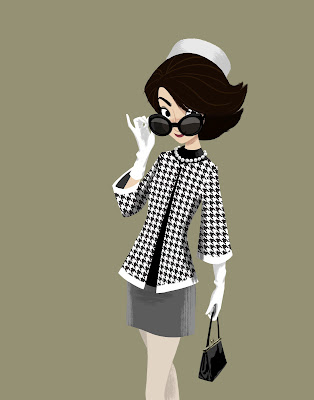 (the thing is, how would you animate that houndstooth texture?

I wanted to do another take on her. I was thinking a bit younger like Yvonne Craig or Marlo Thomas...

This one (above) gets alot of good response. One guy said, "I'd date her."

For this next one, I went for "Emma Peel meets Anne Margaret". I wanted to do something characteristic of her (but this time, NOT holding a gun.)

For the world, I pictured that the buildings would be of "Googie"-style architecture and everyone would drive the concept cars that were built back then but now, instead of being just concept, they were put mass produced. 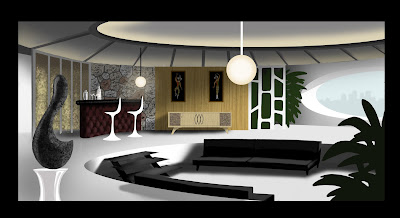 One characteristic of films made in the late 60's was use of the "split screen". So I thought it would be fun to incorporate that somehow. 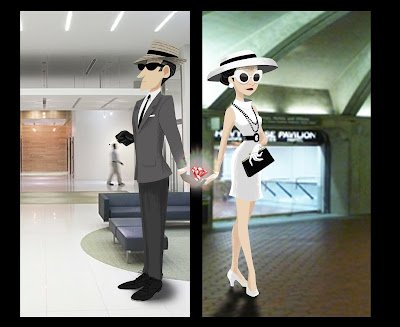 Here's an additional character I designed. I'm not sure how she fits in but its within that time-period. 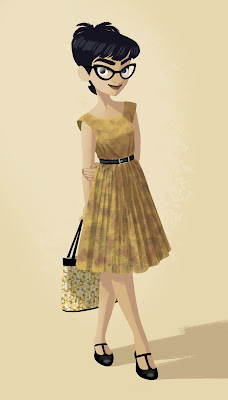 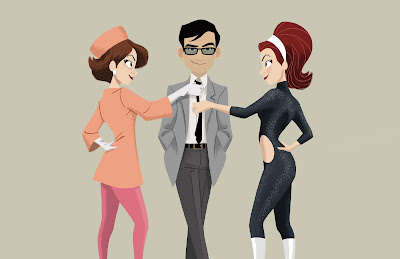 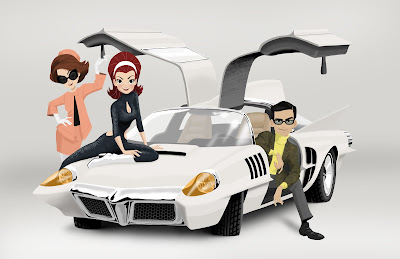 Thanks for viewing and reading!

The Schneb said...
This comment has been removed by the author.
5:55 PM

Oh man, these are fantastic. They inspired me to write a script for it, just put it up:

I just saw your post and read your script a few days ago. I think it's FANTASTIC!

I really liked how you were able to pick up on alot of things like the characters relationship to one another, etc. It's very faithful to my artwork.

Excellent job! Thanks for sharing!

Hello James,
I have recently discovered your 60'caper film very nice sketches. I'm a big fan - from FRANCE -of the Avengers TV show so I have created a blog to talk about unknow sides of this amazing series. You'll find here my reports on your work :
http://steedsecrets.canalblog.com/archives/2013/09/30/28117518.html
I hope you will enjoy it !

Hi James - I would like to purchase the Jackie Kennedy cartoon you've done. Please let me know if this is possible and how much it would be. Thank you.