Back in the day, Disney used to show the animator's completed tests for the week at a thing called "dailies". Every Monday morning, we used to walk over to the next building or down to the theater and watch all of the shots cut together (without sound). The silence was deafening. You could hear a pin drop. There would be a quick "flash" of a slate so you you see which animator animated the scene. Then we'd go back upstairs and say, "Hey..."Joe"... I liked your scene in dailies!"

Well, considering all that's going on (or rather what's NOT going on) at the studio these days, I felt as though I had to do SOMETHING so I became inspired and decided to be proactive and vigorously resume work on my own personal projects. To help motivate me, I figured if I hold my own "dailies", it'll keep me productive.

I have several projects in the works and I'd like to share my progress with all of you. Here's the official invitation: 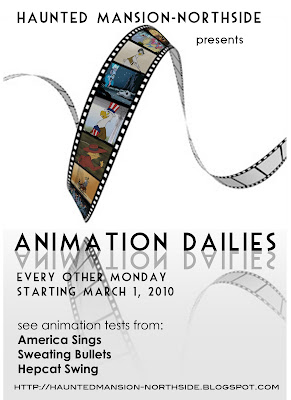 So basically, every two weeks. I'll post a movie of various animation pencil tests and color scenes from my various projects. "What are they?", you ask:

'America Sings': is an animated version of the extinct attraction at Disneyland.

'Sweating Bullets': was the original title of the Disney film 'Home On The Range'. The original story involved a skeletal ghost cowboy named "Slim" and his spectre-like posse, "The Willies" (wonderful play on words) who would steal cattle and devise a plan to run them all off a cliff in one huge act of vengeance for trampling him to death. It would be up to a single calf named "Bullets" and a one-legged jack rabbit named "Lucky Jack" (in which Slim wears Jack's foot around his neck) to save them all! I'm sure it would have been great (or at least better than what they ended up with)!

I figure. why let that concept go to waste? So, for Halloween, I would use video projection to show various Halloween-themed shorts introduced by the vultures from 'America SIngs' and this subject of ghost cowboys, set to the song "Ghost Riders In The Sky". It just seems like the coolest thing.

'Hepcat Swing': is a 5 minute short-film that I am collaborating on with a member from the band Big Bad Voodoo Daddy who is composing the score for this musical set in 1940's Los Angeles during the zoot suit riots.
I love the architecture of the old buildings in Los Angeles, especially on Wilshire Blvd. I love jazz/swing music and swing dancing so I put them all together into one animated film!
Posted by James Lopez at 2/19/2010 5 comments:

Stan Lee's 'Time Jumper' and intro to the "motion comic"

Disney announced they were purchasing Marvel 4 billion dollars. The ink wasn't even dry when I got a call from the Special Projects division to do a series of model sheets (turn-around poses and facial expressions, etc.) for a joint Disney/Marvel project called 'Stan Lee's Time Jumper'. (To find out more about 'Time Jumper', Click Here.)

They gave me a series of visual development artwork of the characters to use as a jumping-off point.

Seeing that I was in for a challenge as I would be going into territory I've never gone before, I figured I should do a research trip to the comic book store. In this case, it was 'House of Secrets' on Olive Ave. in Burbank.

I spent the afternoon there discovering how much comics have changed since I remembered them as a kid. I was being re-introduced to a familiar but yet strange new world. I bought a few books on drawing style for modern-day comics called 'Drawing Crime Noir for Comics & Graphic Novels' and 'Drawing Cutting Edge Anatomy' by Christopher Hart. They were really helpful.

Through researching, I discovered several classic illustrators such as John Burns and Robert McGinnis and became inspired by their work as well. And so began my "crash course" into graphic novel illustration!

Over a three week period, I did several pencil and pen & ink sketches pictured below: 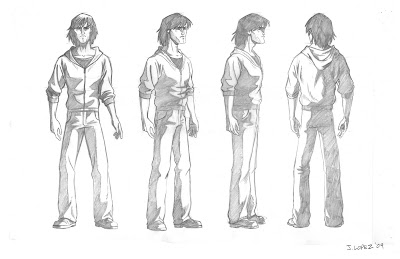 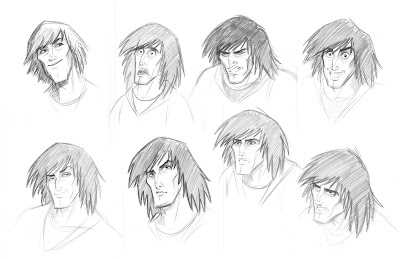 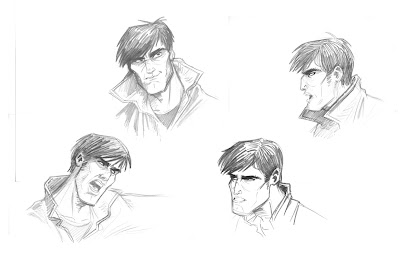 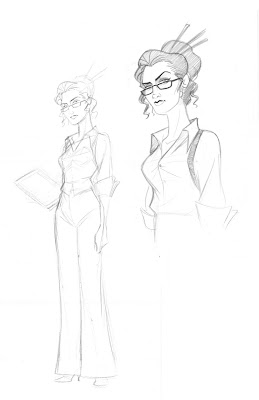 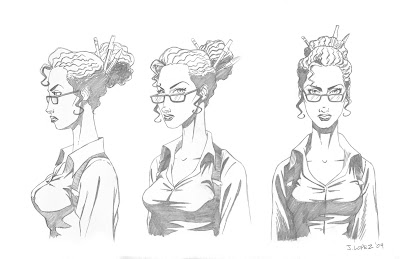 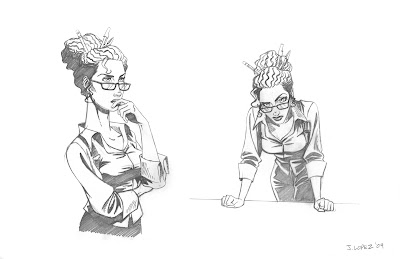 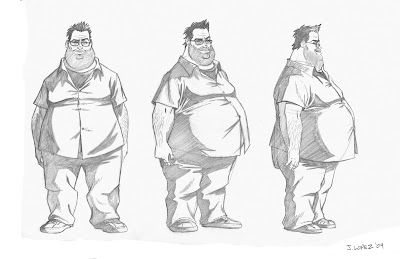 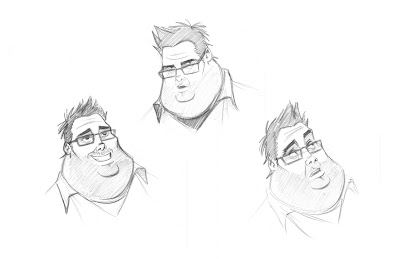 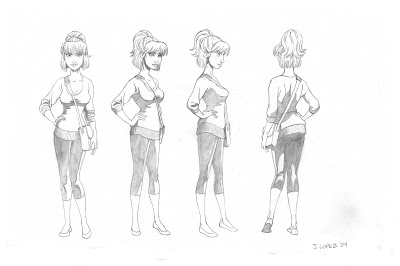 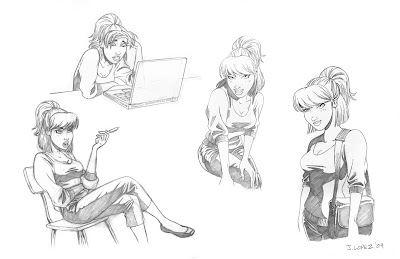 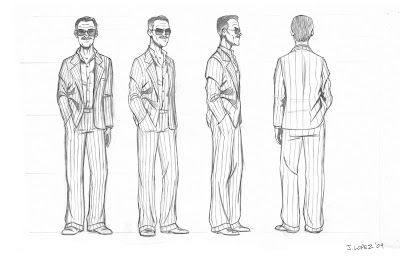 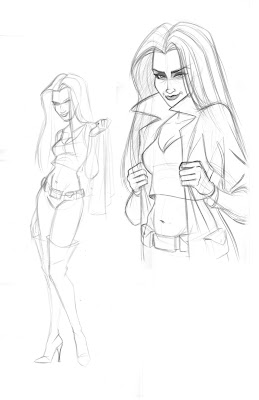 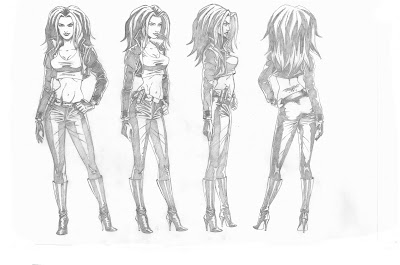 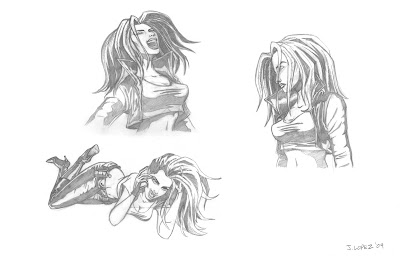 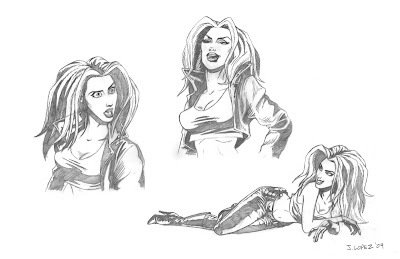 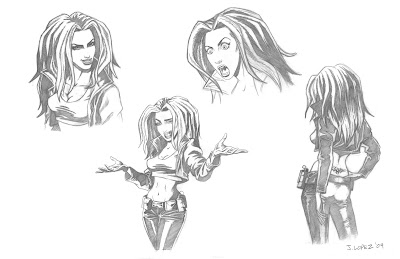 I showed these to the client and they absolutely loved them! I actually got an applause!

When my peers at work would come by to visit and chat, they'd see what I was drawing and they thought I was doing freelance during work hours. Nope, this was legitimate!

Now, I wasn't done yet. I had to clean-up the drawings. In the comic-book world, they call this stage, "inking". So I went to the local art store and bought me a pack of vellum paper and tried out ink pens. I found the ones I liked and went to town! 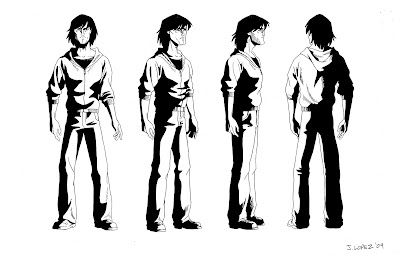 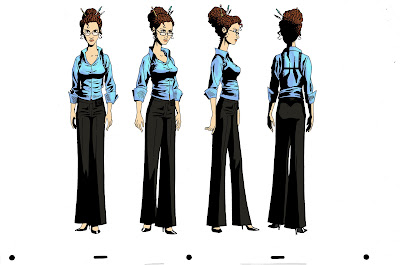 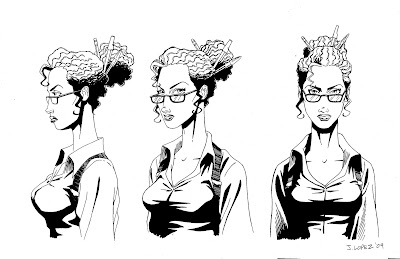 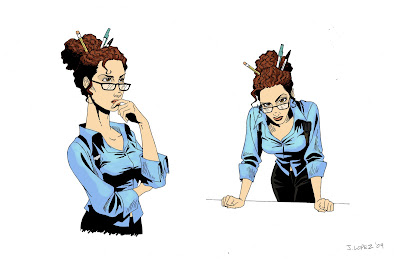 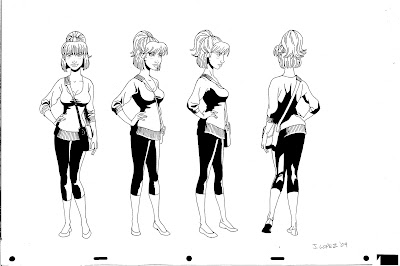 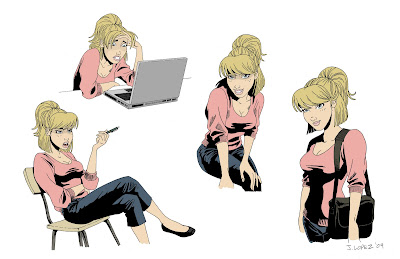 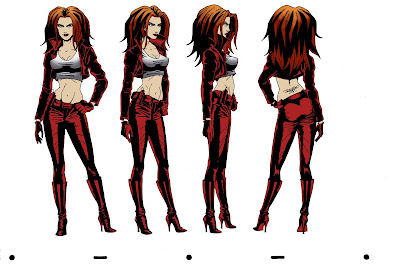 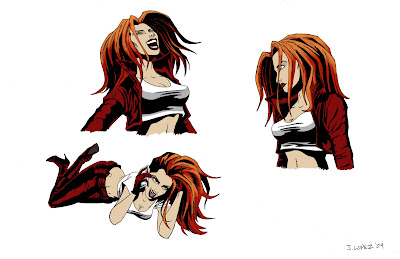 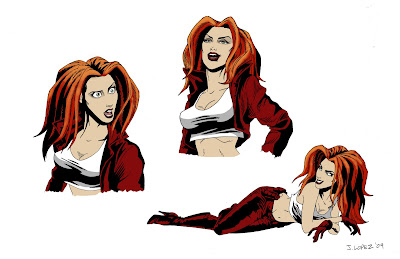 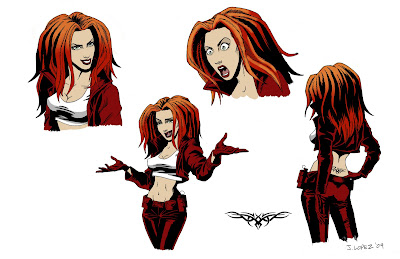 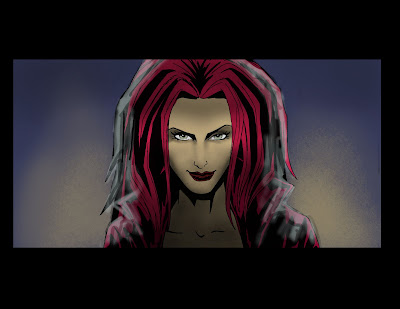 the client asked me if I saw the show. I had seen what I thought to be, what we would call in the animation industry an "animatic" but it turned out to be the actual show.

It was then that I was introduced to the revolutionary new product called the "motion comic". It can best be described as a moving slide-show.

Words don't do it justice, you'll have to Check It Out for yourself!

The show is available on iTunes. You can download the entire series for $7.99.

Actually, this motion comic-thing isn't new. Back in the 80's, a progressive rock band called The Alan Parsons Project made a music video called "Don't Answer Me" in which the style resemble the motion comics of today.
Posted by James Lopez at 2/18/2010 4 comments:

Remember, tuck and rolling-up your pants? Taping songs off the radio with your cassette recorder? Richard Blade on K-ROQ? Patrick Nagel artwork? Staying up late to watch the premiere of Michael Jackson's 'Thriller' on Friday Night Videos? 'The Cosby Show' and 'Family Ties' on Thursday Night. "Be There!", "Where's The Beef?", "I'll Be Back."...big hair, turned up collars, 'Members Only' jackets...

Well, my friends Bert Klein and John Iskander wrote a script for a musical comedy about teen angst set in the 80's. They were looking for someone to do some artwork to go with their pitch packet so a did a few designs.

(So I don't compromise their script idea) The basic story is a love triangle between these three characters. Our protagonist "Popcorn" (which is a nickname given to him because he works the refreshment stand at the mini-golf/arcade) is in love with this girl named Kandy (probably short for Candice). Together, they're "Popcorn n' Kandy" (cute, eh?). Well, there's one person who stands in their way and that's Darwin Lee, the preppy cool kid at school. Granted, it resembles the movie 'Valley Girl" but trust me, the story has an originality and charm of its own!

I like the story because being a teenager that grew up in the 80's, I can relate to the main character. 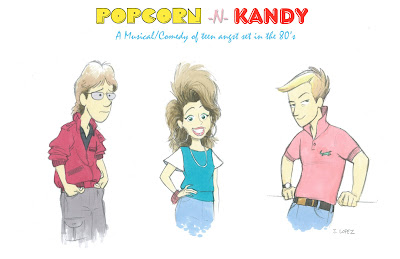 These are alternate designs for the character Kandy: 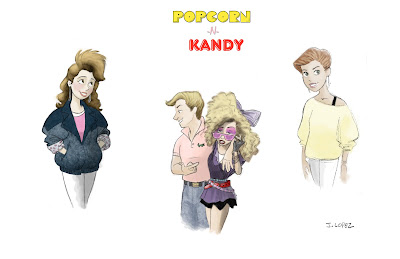 Popcorn had a sidekick which was like his "Jiminy Cricket". It was a little boy who idolized "Mr. T" (from the 80's t.v series 'The A-Team').


One thing I do is I listen to music of the era or genre that I'm designing for. In this case I was listening to a song called 'Cool Places' by Sparks. When I would listen to see song, I saw a title sequence. At the time, I was just starting to use Flash to do animatic storyboards for Renegade Animation Studio on the 'Hi-Hi-Puffy-Ami-Yumi' show for Cartoon Network. This would have been about the year 2005.