First I made sculptures out of Sculpey modeling clay. The busts measure 17" tall by about 8" wide. 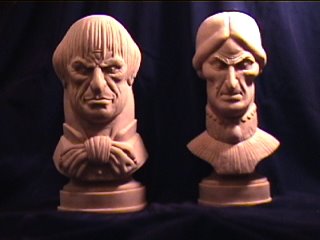 Then, I had a friend of a friend, use a vacuum-form machine to make the positive/negative form. The process basically works by taking a thin, hetaed sheet of plastic, draping it over the sculpture then placing it on a machine-table that has a whole bunch of tiny holes in it that's connected to a igh-poered vacuum. It sucks the air down causing the heated plastic to form around and in the shape of the sculpture. My friend had to re-cast my Sculpey models in plaster because the pressure of the vacuum would crush them to pieces. They power on the machine used wasn't great do it didn't quite capture all of the detail I put in but enough to make an impression.

The effect is basically that the busts seem to turn to follow the viewer's every movement.

Here's a photo of how the effect basically works from "behind the scenes". The viewer is actually looking at the bust/face from the reverse side. A light is placed on the other side to help light and see the details. I seem to remeber reading somewhere that the Disney imagineers discovered the effect while making cast for the 'Great Momemts with Mr. Lincoln' show. 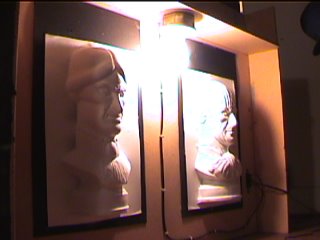 Here's what they look like (using a Night-vison on my video camera). 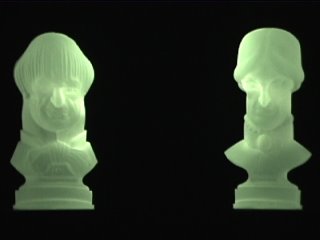 This was one of those effects that didn't quite look right to me as a child. I could see they were concave rather than convex.

Any chance I could get you to make me one of those? :)

WHat allen Huffman said, i would love one of these, i would be willing to pay as well how about $30 each, please contact me at emusurfindork@ao.com

I'd love to purchase one of these busts, if you still make them. PLease let me know!
rogercmc@yahoo.com

Hi James! Wow you're talented. I was doing a random google search for these busts and found your blog. I wanted to ask if you sell molds of these by any given chance? I'm willing to pay any fair amount you ask. Feel free to contact me so we can talk ,if you are selling these. Thanks for posting all the photos and information. PS I'm jealous of your super awesome office. cjuarez3@bak.rr.com

I am kind of a Haunted Mansion geek myself and do a lot of the same things with my house and yard. This summers project is creating the following busts as you have, but I am using mine and my sweethearts faces with the hair and the clothes of the haunted mansion busts. Any coaching? I still get to find somewhere who does the plastic vacuum method. Is there an actual name for the process so I can find it better?

Unknown said...
This comment has been removed by the author.
7:58 PM

I'm very interested in buying a pair of these if you happen to sell them. Just the plastic molds/castings, of course. I'd build the rest.

I can be reached by email at fightlikearobot@gmail.com

I'm not sure if these are for sale or not, or if you could possibly point me in the direction of any concave staring statues online, but, I would love some more information. I have always wanted these!!! :)

These are really great I have been looking to buy these for sometime please email me if you sell these!! Thank you
Email: lindseyaprince@yahoo.com

About six years late , but I would like to buy a set also. Feel free to email me at mrdeadmann@gmail.com

I would love to buy a set of these. We have a Haunted Mansion theme for our hallway, and these would just top it off! Please contact me if it is possible to purchase these. Or trade a donation for them. :)
jilyndasmith@gmail.com

I would love to buy a set of these. We have a Haunted Mansion theme for our hallway, and these would just top it off! Please contact me if it is possible to purchase these. Or trade a donation for them. :)
jilyndasmith@gmail.com

James, Are you selling sets of these busts? Please let me know Thanks, mickeyx2x@gmail.com

Me too. I would love to make these myself but I don't have the skills. Please let me know if you are selling the pair.

please can you contract me asap please
jessica.richardson321@hotmail.co.uk
thank you

(2018) Also interested in the pair! I am in Ohio and need these as part of an elaborate yard haunt. Please email at bradjsherman@hotmail.com

Thanks and great work!

You're project is worth more than that insultingly low $30 that someone offered. I'd consider $300 a reasonable starting bid.

I'd love to buy a pair also
Phcoyotes2011@yahoo.com
Thanks